When I first met my husband, I remember there was a movie he wanted to see that I didn’t. When he mentioned wanting to go to the movie, I told him he could see it with a friend if he wanted to because I wasn’t interested in it. Upon hearing this, he told me that this relationship is about compromise and that if I see and do things that he’s interested in, that he will do the same for me.

And so it has been law for the past 9 years.

Milla = my girl crush. I will watch Resident Evil 12 if she makes it.

Hubs gave the stinky face to watching The Back-up Plan with Jennifer Lopez. 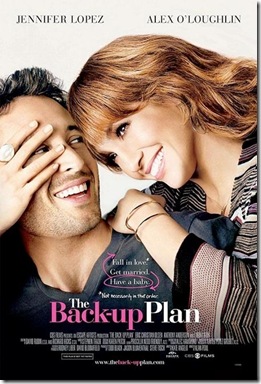 What happened to our compromise? I told him that I would remember this forever – or until Tron 3 is released. Whichever comes first.

So we started the movie.

The story was about Zoe, an incredibly hot girl that can’t find a man, gets artificially inseminated, meets a hot dude in a cab afterwards, falls in love, and doesn’t tell him that she’s pregnant. Got it?

Have you ever watched a movie you knew you were going to hate by the opening credits alone? That was The Back-up Plan. (I’m serious about the credits too. It was a silly animated sequence that lasted SO long.) The movie was cliché and without any redeeming quality like humor or emotion. I’m pretty sure Jennifer Lopez is trying to stop Alex O’Loughlin from watching the movie in the poster.

I think we made it to the half way point until we turned it off. Yes, I’m reviewing a movie I only saw half of.

After we turned the movie off, I begged for forgiveness for making him watch it but then I stopped short of promising to see Tron 3 with him. He forgets a lot of stuff. But he’ll remember that.

We then watched our back-up plan: Aliens on Blu-ray.

Does anyone else have a special agreement to do or watch things together with their spouse, fiancé, girlfriend, or boyfriend?

Tagged as movies, The Back-up Plan