Since last week’s Flashback Friday was about my wedding in Vegas, I guess it’s only fair to write about my honeymoon. We went to Maui, and let’s just say that Maui is the most incredible place that ever existed.

After the wedding, we flew to Maui and stayed 7 nights. We stayed in a condo that we booked on VRBO. Here’s the view from our condo balcony.

We rented a Jeep so we could do some off-roading. Renting a Jeep made me realize that I will never buy a Jeep. No space in that car and the seats suck. But at least you look cool when you’re driving a Jeep. And really, that’s what matters.

Maui is all about day life. People are up at the crack of dawn and in bed once the sun goes down. We had a hard time finding any restaurant or bar that was open past 10pm. So instead of late nights, we had early mornings.

Each day, we did some type of excursion or hike that required us to get up at 4 or 5am. We really made the most of our time there and I don’t think we ever weren’t exploring something. When we weren’t doing an excursion, we would pull off to the side of the road and hike to random overlooks and beaches. 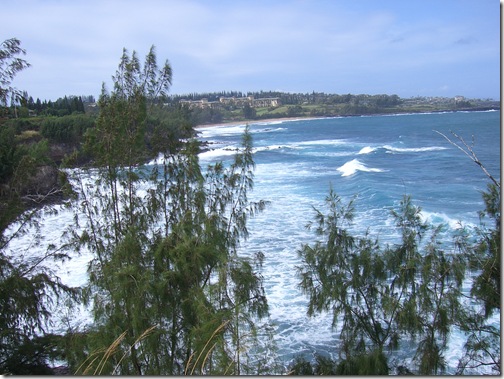 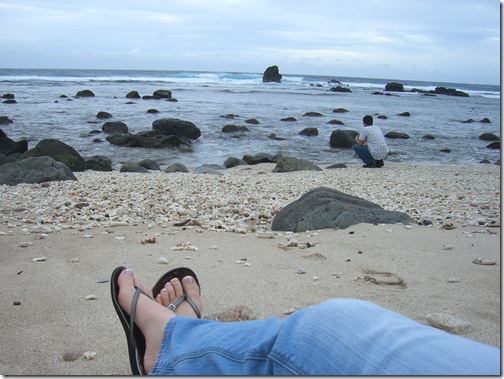 One more step and I’m single!

We didn’t book any of our excursions until we got there which worked out better than I thought it would. I had an idea of a couple things I wanted to do, but that was it. So, here are some of the things we did in random order:

We went on a whale watching boat tour. (It was FREE because we sat through 2 agonizing hours of someone trying to sell us a timeshare.) 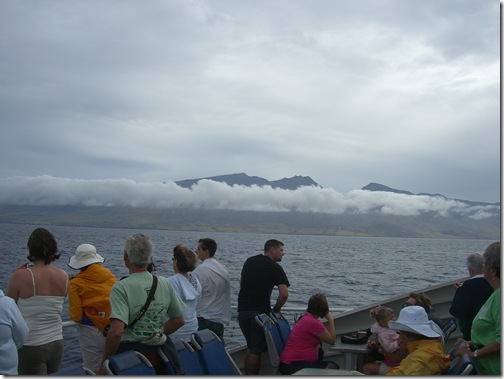 While we were on the boat, hubs expressed how excited he was to be married to me through pictures. 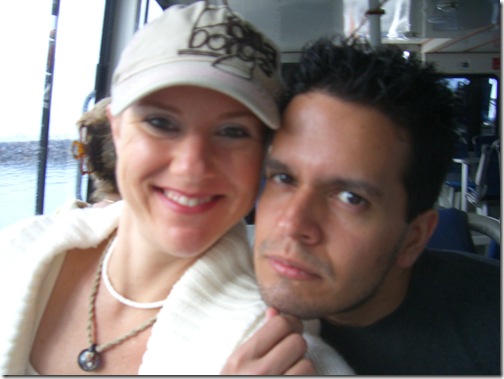 We rode a bike down the Haleakala Volcano. (One of our tickets was free from that same timeshare deal.) We rode up in a van (about a 2 hour ride from our condo) and took the bike down.

No pictures from the actual bike ride because we were going 30 mph downhill and it was on an open road with lots of curves. It was SO fun and SO dangerous. We eat danger for breakfast, though. And eggs.

We stopped half way down the volcano for breakfast and then did some exploring. Why get your lady 12 roses when you can get her ONE of these? 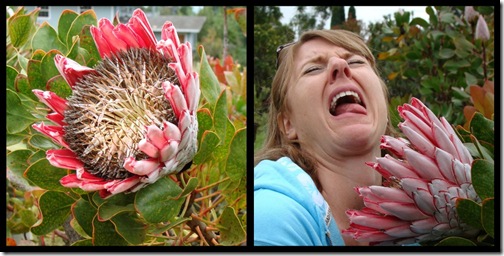 After the bike ride, another girl in our group was signed up to tour the Maui Winery at Ulupalakua Ranch. Our condo was in the opposite direction of the winery, so the driver offered to either take us home or take us on the tour for free. Did someone say “free?” 🙂 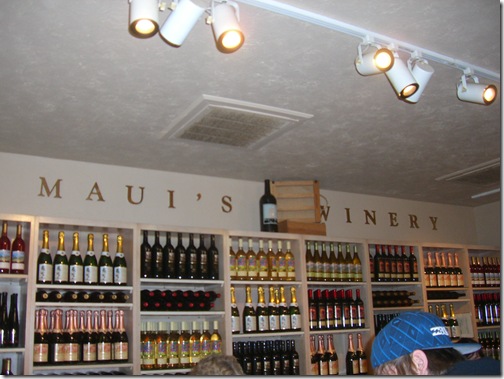 The winery was beautiful. Hubs bought some wine and shared it with a nice man.

There was a cute shop across the street from the winery where we had lunch. The cat outside of the shop would not move or open its eyes when we pet it. Too much wine, maybe? (And yes, it was alive.)

We went on an aerial tour of the Big Island in a little commuter plane. The girl that took our picture here started throwing up about 10 minutes into the flight and never stopped.

The Big Island (also just called Hawaii) is bigger than all the other Hawaiian islands put together and the lava flow from the crater keeps adding to its size.

The crater of the volcano wasn’t what you typically picture. It looked like black, flat, dead land and you could see red lava in areas just under the surface. 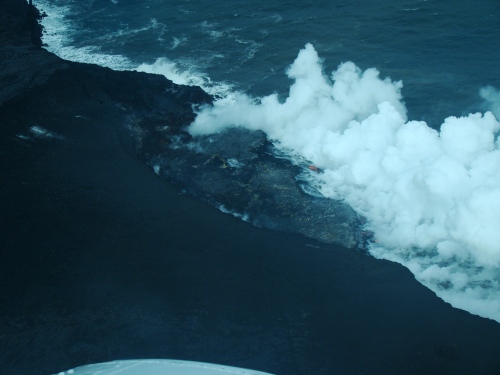 The smoke is where the lava was flowing into the water. No virgins were being sacrified, which was disappointing. 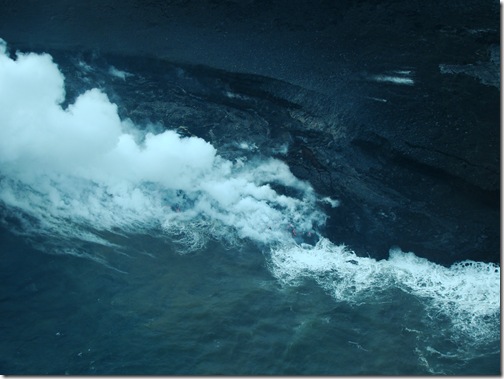 Toward the end of the flight, I wasn’t feeling so hot so hubs consoled me by taking a picture of my misery and laughing. 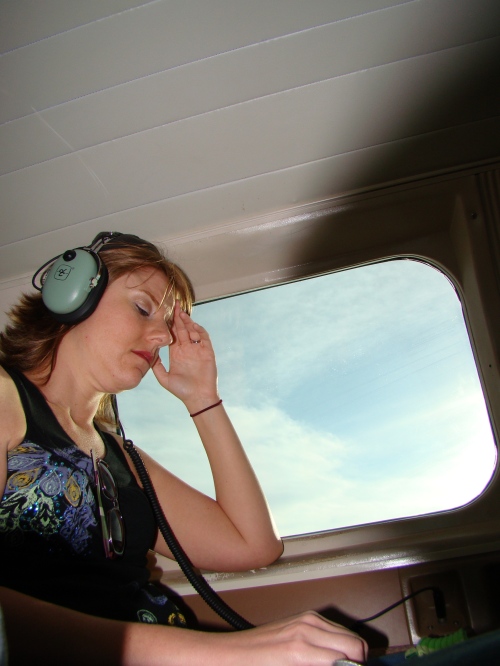 We drove the entire Hana Highway and made tons of hiking stops along the way. It took us about 12 hours from when we started to when we got through the highway and we didn’t even come close to seeing everything.

Stops along the way included the Twin Falls. We were the only ones around that hiked to the second fall (which wasn’t easy) and hubs was braver than I was. He waded through deep water to get over there.

We stopped at a black sand beach that had sea caves.

We hiked through a bamboo forest.

At the end of the 2 mile hike was a waterfall so huge that we couldn’t even get the whole thing in one picture. Please enjoy the worst picture ever taken of us by strangers. 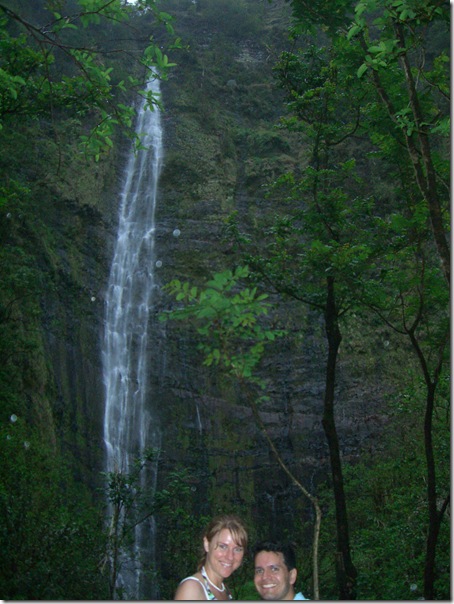 The ride through the Hana Highway was one of the scariest things I’ve ever done. We actually had to sign a waiver saying we wouldn’t drive it when we rented our car. It’s considered one of the top 10 most dangerous roads in the world.

Half of it is one “lane” that’s mostly unpaved, pitch black once the sun goes down, no guard rails, steep cliffs, and very small bridges to cross. At one point, about 15 mooing, crazy-eyed cows surrounded the Jeep and we were freaking out. We waited about 5 minutes for them to pass before we could keep driving.

We went to a Luau where they handed you Mai Tais as you waited in line to get in. Maui, you know just what I like. 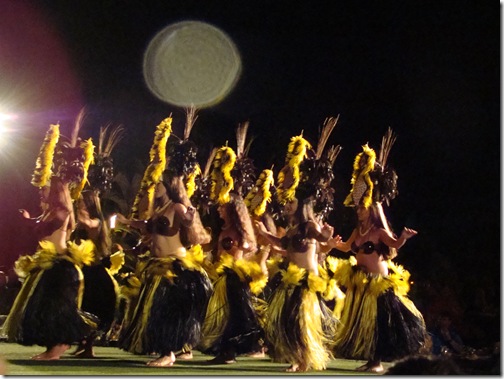 Hubs found a tour that included rafting, snorkeling, whale watching, breakfast, and lunch for $99 a person. It was supposed to last 2 hours and lasted almost 4 hours. Best money we spent there and probably the most fun we had on the entire trip.

The waters were so choppy and the boat was going so fast, that I almost fell out. Hubs also thought that was hilarious.

Part of the trip included snokeling around the Molokini Crater, one of the inactive volcanos.

A reef shark swam right by us while snorkeling. I tried to get a picture, but it didn’t come out clearly. So here’s a picture of me! 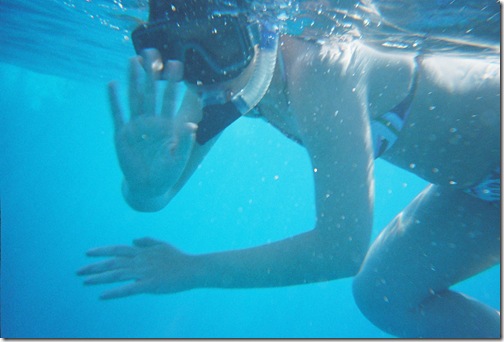 We visited a nude beach. We had to climb up a big rock to get to it. This is the non-nude side.

And hubs took some surfing lessons. 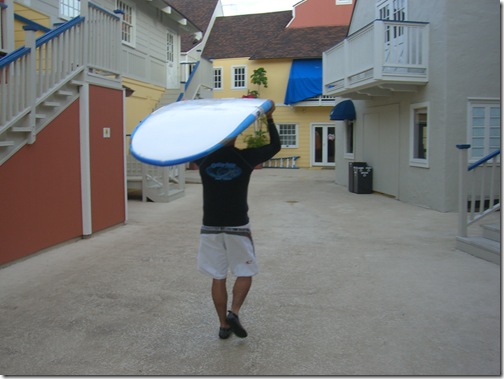 Some random facts about Maui:

Also, it’s windy most of the time. 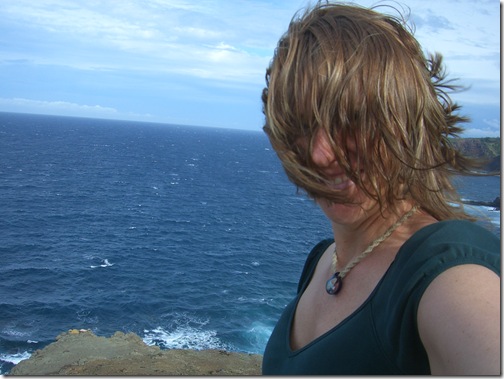 Ok, so that was long and picture heavy and didn’t even cover it all. I’m looking back at these pictures and it doesn’t do Maui justice. The beauty in person pales in comparison to what I see on film.

The rest of the time we spent exploring, eating at amazing restaurants, drinking fruity drinks, and then spiraling into a fit of depression because we had to leave.

Where did you take your honeymoon?

Or if you’re not married, where did you take your favorite vacation?

23 responses to “Flashback Friday: The Honeymoon”