So, about that marathon I ran yesterday.

The Jacksonville Bank Marathon is a Boston qualifier and I know you are all dying to know if I made it. A lot of you noticed that I didn’t mention the race on the blog and there was a reason for that. If you read my Savannah RnR Race Review, you know that I trained hard for 5 months only to be let down by a crap race and a knee injury. Honestly, I wasn’t sure when I’d be able to run another one and that coupled with the thought of Savannah left me sad and disappointed. It took me 2 weeks after Savannah to be able to talk about it without my eyes tearing up. So, as much as I love the support from all of you that read, comment, tweet, facebook, and email, I wanted to treat this race like one of my long training runs. No stress. No build-up. Just running. I didn’t talk about this race much with anyone (not just the blog world).

Brad (my pace twin) from my running group was equally disappointed with his performance in Savannah and he was ready to bust a sub-5 hour marathon about 10 minutes after he finished the race. He also felt like he trained hard for disappointment, so he wanted to up for the Jacksonville Bank Marathon. He tried to get me to sign up too but I wasn’t sure if it was a good idea with my knee injury. So instead, I decided to keep training like I was going to run the race and see how my knee felt as the weeks passed.

I was determined to get my knee back to normal. I went for a massage 3 weeks in a row to work on my IT band and my shoulder. I started using athletic tape on my knee during runs, and I iced every night even though I wasn’t feeling pain. My knee slowly got better, so I signed up after Thanksgiving.

Brad and I were planning on driving up to Jacksonville the morning of the race, running the whole thing together, and driving back after. But while I was in Vegas, Brad was hospitalized with pneumonia. (!) He’s doing MUCH better now, but he was grounded from running for 6 weeks (doctor’s orders).

So, I was alone for the race and I didn’t know anyone else doing it. Because I hate wasting money, I decided to do it on my own. I mean, if my hubs doesn’t eat a $1.00 yogurt before it expires, I freak out so I was not about to throw away a $75 race registration. I really didn’t want to drive to Jacksonville alone, but I was going to suck it up.

A week before the race, my friend K volunteered to go with me. K needs her beauty sleep or she’s a real treat, so she heavily suggested we get a hotel for the night. The cheapest one we found that we were willing to stay in was a La Quinta for $44 a night. (And incidentally, they had the best customer service ever). I met her at her house after the big bossman holiday party, we drove up, checked in, and went to straight to bed.

The morning of the race, we got up bright and early. And by we, I mean me.

I got ready, taped my knee, and put my race fuel together.

We left a little early for race day packet pick-up, which was held in the gym of The Bolles School.

It was pretty cold outside (49 at the start and an awesome 65 at the finish), so besides a port-o-potty trip, we stayed in the gym until 15 minutes before the race start to keep warm.

If you think my boobs look fabulous, thank you. That’s the magic of 3 PB & Js stuffed in there.

The race had about 3000 runners combined for the 5k, half, and the full.  All the runners started at the same time. So, I started back by the 5 hour pacer and Mario to avoid the crowd.

Once the race started, K saw me off, and then left to get some breakfast and head back to the hotel. 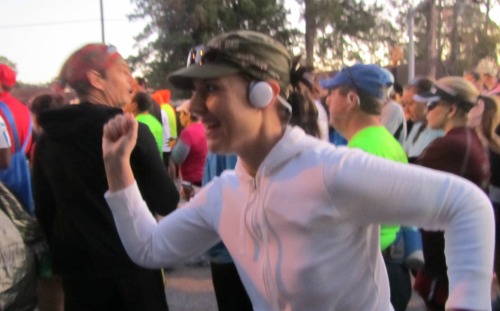 The course was beautiful. About 85% of it was through up-scale neighborhoods with amazing houses that were shaded by over-hanging moss trees. The course was so surreal and peaceful. I gave my camera to K so I didn’t take any pictures during the run, but this captures most of the race scenery.

The race didn’t have much crowd support. I know runners love massive crowd support but I gotta say I’m not a big fan. Too many people cheering stresses me out and makes me run faster than I want to or makes me feel like crap if I need to walk. The small sporadic groups that were cheering were perfect for me.

At mile 7, I turned on my music. Usually I listen to fast songs while running, but I picked a slower one to start with so I wouldn’t feel the need to run too fast. I listened to this song (that’s a YouTube link) six times. It perfectly captured the mood of the entire race. From then on out, I listened to every slow song on my iPod. I hate slow songs when I’m running, but it just worked for some reason. This is not your typical running playlist, but these particular songs really put me in a peaceful, happy, smiley mood.

You know I’m in a good mood when Taylor Swift doesn’t piss me off.

Shortly after mile 8, we broke off from the half marathoners and the runners got even sparser. About that time, I passed one of the pacers. I didn’t know what he was pacing for and I thought about asking but I didn’t want to be stressed out if he ended up passing me later on (he didn’t). Around mile 11, we were running on roads that were open to cars and one of them drove through a freakin’ water station and came close to running me off the road. Most of the drivers were really respectful but a couple of them got so close that I could have extended my arm and touched the car. I think that would be my only complaint about this race – the d-bag drivers.

My left shoulder started hurting early on but I didn’t give a crap. My legs were working and that’s all that mattered. I was in a positive state of mind and felt good the whole time and I was passing people for all 26.2 miles, including this guy at mile 23.

(Besides the tutu, he had teal arm warmers, and a very colorful Micky Mouse hat on.)

It was such a mental boost to pass people and I’m sure that has a lot to do with starting in the very back.

The last 3 miles were the hardest. That’s when my pace slowed down considerably, but I was just happy that I was still running and not walking so I didn’t care. The finisher’s shoot was the track at the Bolles School where I crossed the finish line smiling and waving with no other runners in sight.

I kept running through the shoot, past the guy in yellow with the medals, and grabbed my medal from him while still running. Why didn’t I stop? I do not know.

I love my medal, by the way.

I met up with K at the finish line, grabbed some water, a banana, some hot vegetable soup (!), and sat down for about 10 minutes before I was ready to walk to the car.

I looooved this race. I didn’t even mind running alone. I’m so bummed that Brad couldn’t run it with me but I’m so happy I stuck with it. And I’m so happy K came with me because she made everything easier (she drove the whole time, held my things, served as balancing post as I stretched before the race, took pictures, brought my flip flops after the race, and patiently waited as I hobbled behind her walking to the car). It was a peaceful, flat, beautiful, no stress race unlike the crowded, loud, and obnoxious Rock n Roll series.