So, I went out Friday night. Hubs had plans to take his team out from work as a thank you for finishing their first game. I wasn’t going to go but hubs convinced me at the last minute with promises of lots of food and all-night access to his bad self, so how can I say no to that? So yeah, not planned but it happened. 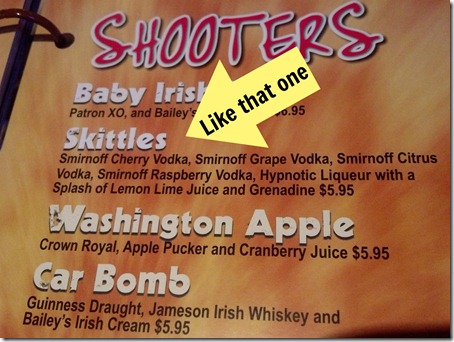 It was all sorts of awesome. I think I just really needed to have fun and eat something that I really wanted for once instead of ordering the healthy thing. So, I broke my no drinking rule and then I ate all the things.

Oddly, I do not regret it at all. Not even when someone called me out for shoving all the nachos in my face. It was delicious and that person can suck it.

Saturday morning at Crossfit, in what was possibly the worst timing ever, I had my body fat calculated. Getting on a scale after Gluttonfest 2013 was slightly humbling. In case you’re wondering, I have 22% body fat and I’m pretty sure 15% of that was nachos. My body fat is considered “average” but even so, I was a little disappointed only because I’ve been lower before. I just really wanted some type of starting measurement since it’s been awhile since it’s been checked. I’ll have it checked again in a month and in the meantime I’m going to try to get those numbers down.

My trainer also gave me a little nutrition pep talk and it made me feel a lot better. It was nothing I didn’t already know, but sometimes it just helps to hear it from someone different. Saturday was also the first day in a week where I didn’t think, “I feel like total shit today.” So finally, my poopy pants are off and my big girl pants on. I’ve been eating extremely well the past two days and even had an almost too awesome nine mile run yesterday.

This was our workout at Crossfit by the way.

Here’s a video on how to do a ball exchange.

Our trainer has this new thing where he likes to make each card worth 10 reps instead of what is actually on the card. So basically, we do more reps and the card just chooses which exercise we do next.

For my cardio, I picked the stair stepper while hubs ran a quarter mile. You can pick whatever you want – jump rope, jumping jacks, the river dance. Whatever gets your heart rate up. Today it hurts to laugh and sneeze, so try it out. It’s a good one.