The Rest of Vacation

I’m back from San Diego. I love visiting my family, but man it’s hard leaving. I only get to see them once a year since they’re on the other coast. Leaving makes me sad for weeks because I know how long it’s going to be before I see them again. We didn’t all get a picture together this time, but here’s the one from last year. 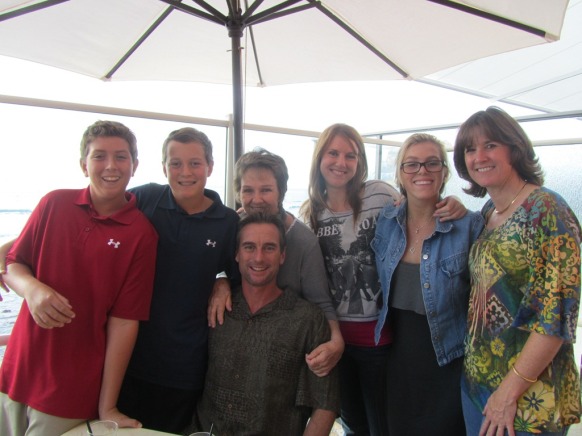 (From the left: my nephews (who are now taller than me), mama bird, brother, moi, niece, and my SIL’s sister)

I took the red eye home on Friday and had the whole row to myself. I love when that happens. That’s when the armrests go up and Paula gets to stretch out her 5’9″ body. I’m not good at sleeping on planes but I love red eye flights so I don’t end up wasting a whole day traveling. I can usually get that spotty, drooling, head-whipping-forward-and-waking-me up sleep on the plane and then I take a little nap when I get home and I’m good to go for the rest of the day.

I wanted to write a little more while I was out there but was too busy reigning as the Queen of Leisure, so here’s what went on during the rest of my vacation:

That’s her riding in front of me. I don’t think I’ve been on a real bike in five years. It was a lot of fun. It was super foggy the entire time, so it was nice that I wasn’t baking in the sun but not so nice that I could barely see the view of the beach on the right. I’m pretty sure if I lived in Carlsbad, she would be my biking buddy. Those hills do not mess around. It’s like an outdoor spin class out there. As I was struggling to get up the hills, I’d pass people running them like it took no effort. Those hard-bodied jerks with their wonderful stamina.

I love that California has bike lanes and paths everywhere. I don’t think I’ve ever seen another state that caters to outdoor activity as well. If Orlando was more activity friendly, maybe I’d attempt to go outside more than once a month. I mean, probably not. But I like having options.

I ran across that little fella on the bike ride. Kate asked the two guys behind him how old he was and they told us they had no idea. Some guy just ask them to watch his bird while he got coffee at Starbucks.(?!?!) I’m telling you, people were swarming around this bird, taking pictures with it, and asking the guys questions. If you’re having trouble meeting that special someone, get a bird. Trust me. It going to work. They will come to you.

3. A half hour into our bike ride, this happened.

It was 10 in the morning and I knew it wasn’t a good idea but someone was a terrible influence.

4. After our bike ride, we took a three-mile walk at Batiquitos Lagoon. The fog never let up, but the view and trail were still really pretty. 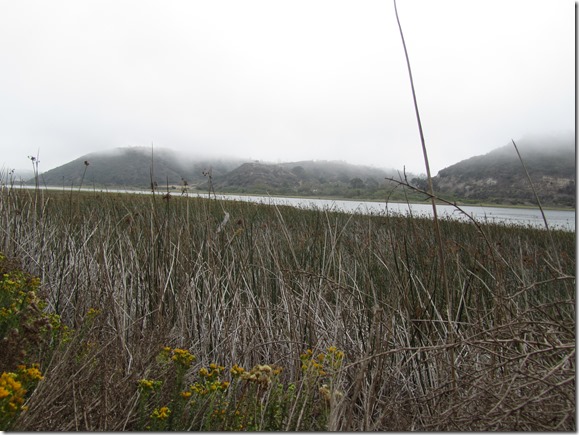 It was nice to get off that bike seat for awhile and stretch my legs. Plus, we had to mentally prepare ourselves for the Starbucks frappuccino we stopped for after the walk. So basically we burned 200 calories and then consumed 300. This is my favorite way to exercise.

5. Big brother and I went out to dinner at the Wild Note Cafe with a couple of his friends.

That dude can eat whatever he wants and stay thin. I don’t even understand it. I work out five or six days a week to sort of fit in my pants, and he works out one or two times a week (if he feels like it) and holds back if he starts to sweat because he doesn’t like sweating. He actually said that to me. He’s lucky he’s still in the family after that one.

6.  After dinner, we saw Everlast next door at Belly Up. 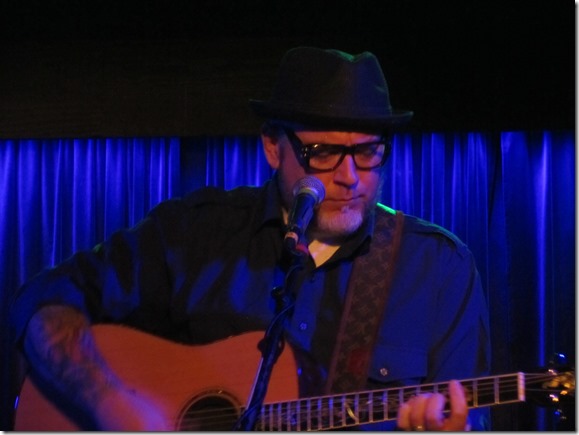 If there’s anyone that loves live music as much as I do, it’s my brother. He usually finds a show for us to go to while I’m in town and it’s always a good time, even when I don’t know the band.

I was checking out Everlast videos before the concert and found this one for you Aaron Paul fans. 🙂

7. And finally, my last meal before I left town. 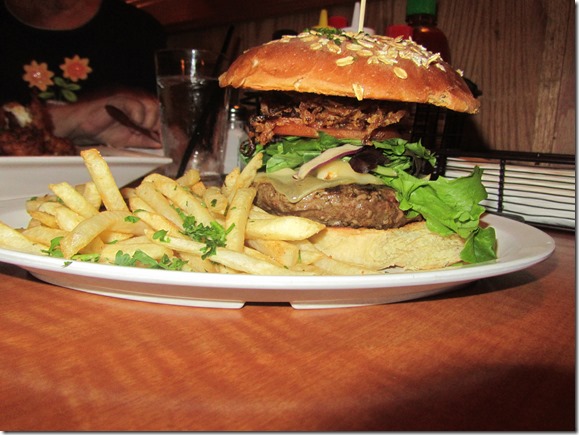 That’s the grass fed Kobe burger from Encinitas Ale House (Gruyere, Gorgonzola, Onion Straws, Tomato, and Baby Greens). I shared half of that burger and half of another one with my bro. Mom got the fish and chips with a bucket of tarter sauce. That woman loves her sauce like no other.

I had a five minute worry that getting on a plane after a giant burger was not going to go well, but good news, I made it home without incident. So besides the napping and shopping and adult beverage drinking, that is how I spent my week vacation with the birthday girl.

10 responses to “The Rest of Vacation”