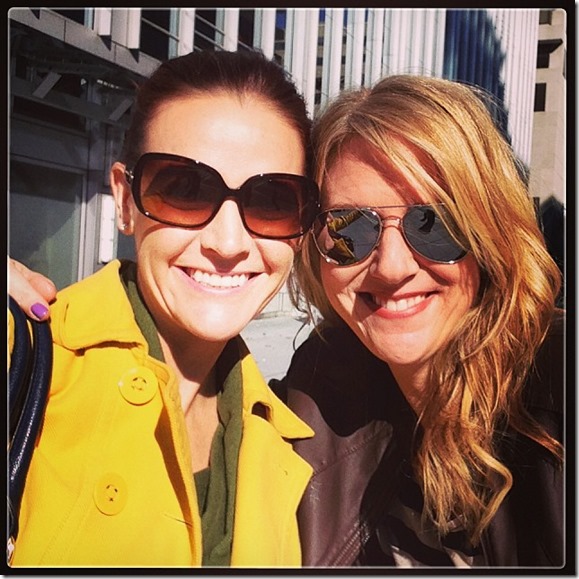 She lives in DC and wrote Hungry, Healthy, Happy for awhile. We met through our blogs, decided to take our online stalking relationship to real life stalking and the rest is history.

Well, Melissa just finished her first marathon and because I’m selfish and wanted to hear all about it, I asked her if she wanted to guest post. She totally fell for it. I don’t normally accept guest posts. In fact, this is my first one. Probably my last one. But I love hearing about this kind of stuff and I was thinking you might too.

So without further adieu…

Out of blogging retirement to tell you all about my marathon?!?! Yes, please! After all, the only real way to validate my achievement is to toot my own horn via the internet, amirite? 😉

So, those of you who read my little old blog back in the day may remember the following chain of events:

The PT really worked. I got back to running in November of last year and joined P and Michelle (among many lovely others!) for the Celebration Half Marathon in January. When I mentioned to my co-worker that I was thinking of running the DC Rock n’ Roll Half in March, he asked, “Why not the full?” I didn’t have a good answer, so I signed up. Seemed like a well-thought-out plan.

I proceeded to tell myself my goal was simply to finish–not for time, not for glory, just for the achievement of actually RUNNING A MARATHON (<–yes, that requires all caps in my world). Running a marathon is a pretty sweet accomplishment, and I wanted to be part of that club.

If you followed me in the past, you know I was militant about my training. This time? I was so un-me, it was mildly baffling. I made a training plan, but if I missed a workout, I didn’t really think about it. (It was a long, cold winter, yo.) I slowed down my runs to 9ish minute mile pace (instead of the 8 minute insanity that likely caused all my injuries) and did exactly 2 speed workouts. Not 2 speed workouts per week. Two speed workouts TOTAL.

HOWEVER–in typical Melissa fashion, I fell. A lot. Well, twice. Once on the ice just one mile in to my 18 miler. I got up and finished the run, then went to urgent care for a pretty seriously sprained right arm. It was really fun not being able to feed myself or fasten my bra for the two weeks following that. The second fall, sweet baby Roo (that would be my dog) got under my feet, and I fell on my face. Because I have no shame and needed to be coddled, I took selfies of my scraped fat lip and posted them on Instagram. The world needs to see that kind of thing. I also tore my favorite running tights and made mincemeat of my knee in that fall. I actually had to sit down and put my head between my legs because I was seeing spots and thought I might pass out. So that was super fun. Oh, and that happened just a week before marathon day. Naturally, I went out the next day and blew through 11 miles like I had something to prove. I know that if you don’t post it on Instagram, it didn’t happen, but I took a picture of my Garmin, which is almost the same. Also, running fast miles less than a week before my race might not have been the smartest move, but since when do runners do smart things? 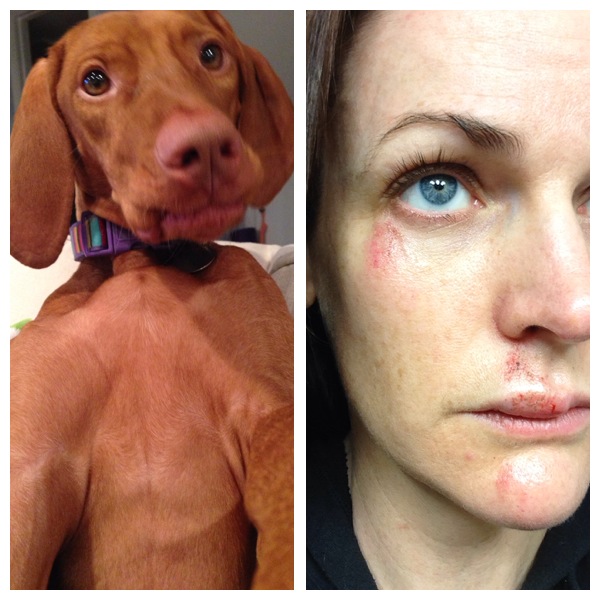 Roo sees me taking selfies and needs to get in on it. I understand.

After serious taper crazies (I have never had so much nervous energy in my life), I woke up on race morning completely terrified but also strangely ready. I was able to meet up with Steph, an old friend from Michigan and my training partner, before the race, and seeing her calmed my nerves a tiny bit. I still felt like I was going to throw up, but felt better that a friendly face was nearby to hold my hair back.

When my corral finally set off, I was so cold/nervous that my teeth were chattering. I know–I’m not dramatic at all. But after about a half mile, I settled in and just felt excited that I was RUNNING A MARATHON.  I tried not to run too fast and reminded myself that my primary goal was to FINISH. Still, I did have a secondary goal in mind of finishing in 3:45–Chicago qualifying time–so there was a fair amount of people dodging going on. In general, though, I tried to enjoy the energy and not lose sight of the fact that we were running along the National Mall, which in itself is pretty cool. 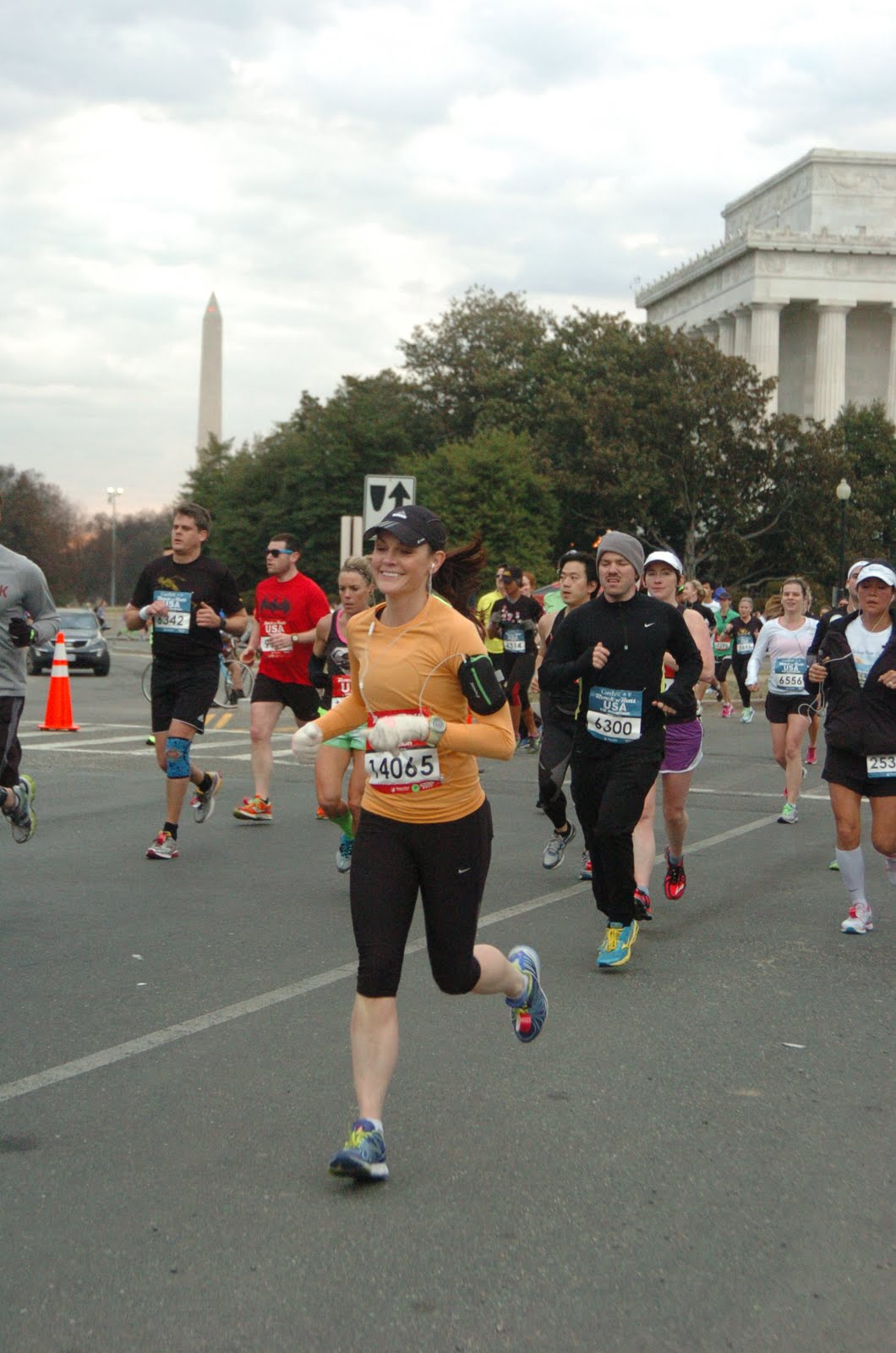 About 6 miles in came a killer hill. I’d run it before and knew it was coming, but we’re talking at least a quarter mile of steep incline, so I basically hated my life for those three minutes. There was a ton of crowd support, though, so that ensured I wouldn’t wuss out and walk or anything. Around mile 8, I spotted a co-worker who’d come out to cheer me on, so that made me pretty happy, and shortly after that, I caught up with the 3:40 pacers. While I said my primary goal was to finish, and my secondary goal was to qualify for Chicago, my tertiary goal (I’m so annoying) was 3:40. Or–more specifically 3:38. I have no idea why I picked that number, but I wanted it. I wasn’t going to be heartbroken if I didn’t hit it, but I knew I could, and I was going to try for it. 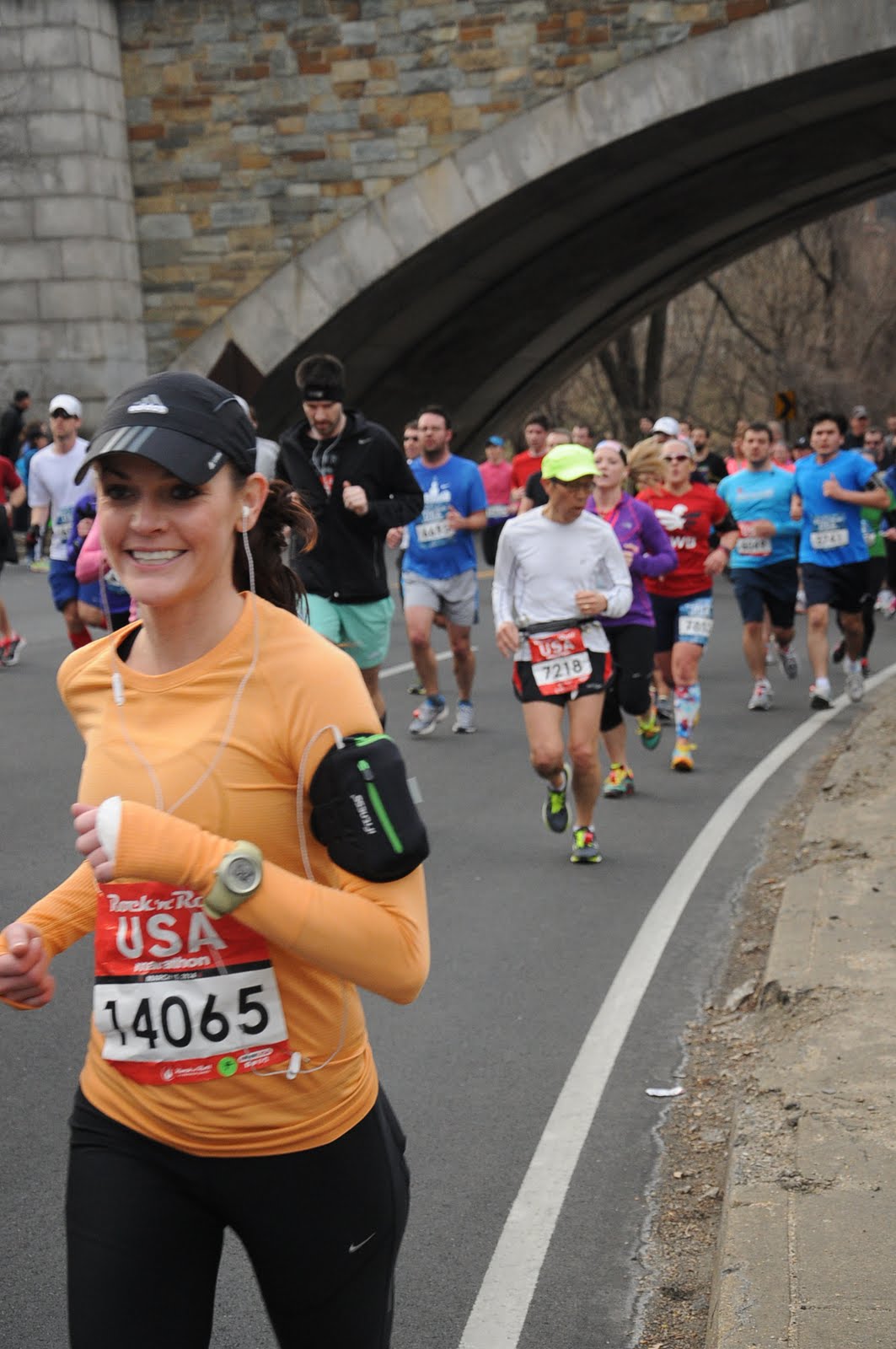 Mike and Tim, the pace group leaders, introduced themselves and made me introduce myself to the group (Melissa, from Michigan, Project Manager, first time marathoner). Now, I have never been a particularly social runner–or person, if we’re being honest. I’m a little shy and usually feel awkward and like I’m talking too loudly and saying stupid things. But this group felt different–safer somehow. They were supportive and interesting and actually super helpful. Mike and Tim told us when to ease up on the pace, gave us tips about the course, and were generally entertaining throughout. Miles 8-20 flew by. I’m not even exaggerating. I was smiling obnoxiously the whole time. 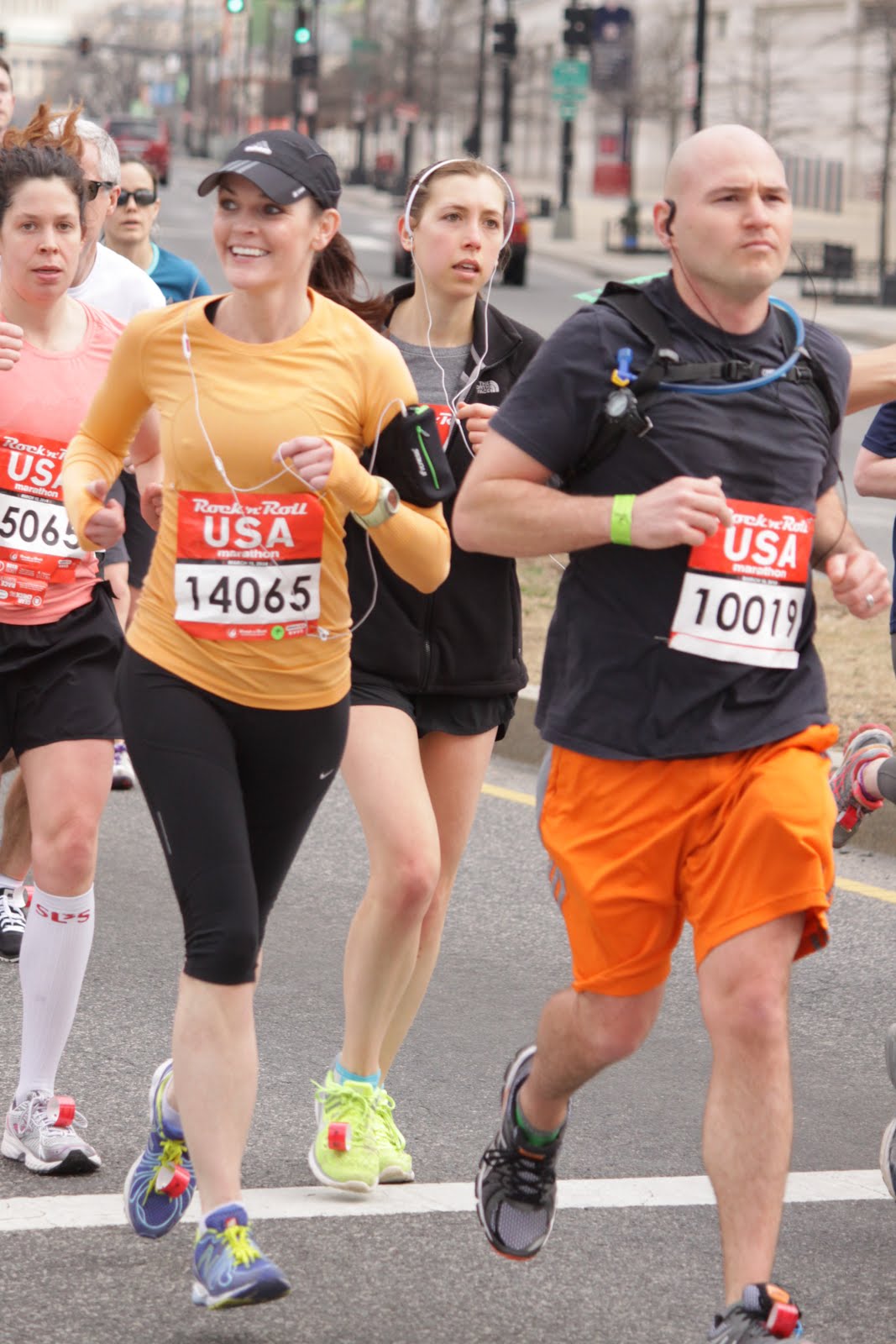 I also saw my parents a few times and a couple other co-workers who’d come out to cheer, which was the best. I got so excited when I saw them, and it was really nice to have people there for me–I’ve never had that before, and I was surprised at how much it helped! I also pointed out to my spectators that I was “running with the fast people!!!” I am so embarrassing. 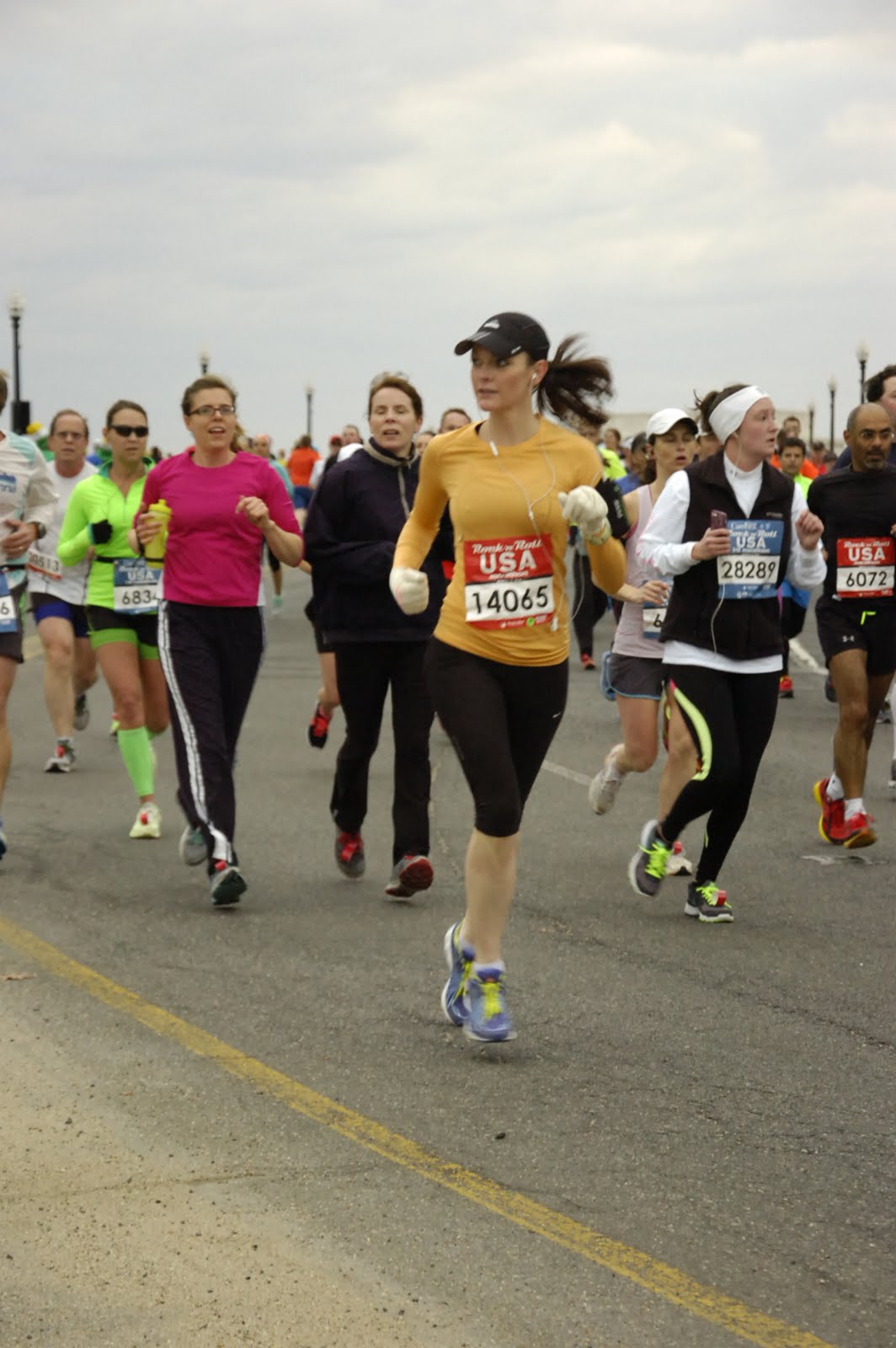 About mile 21, we headed out to a long and lonely loop around a park, and my legs started to get tired. I kept up the pace, but I started to feel a new kind of pain around my upper thighs that I’d not experienced before. This is where it got pretty mental, and I really had to talk myself through. The pacers were about 20 yards ahead of me, so I told myself to run my own race. That I knew it was going to be hard. That if I wanted to hit my goal, I was going to have to work for it. That I could slow down, make it easier, still finish in 3:45, but I wanted that 3:38, so I kept pushing. 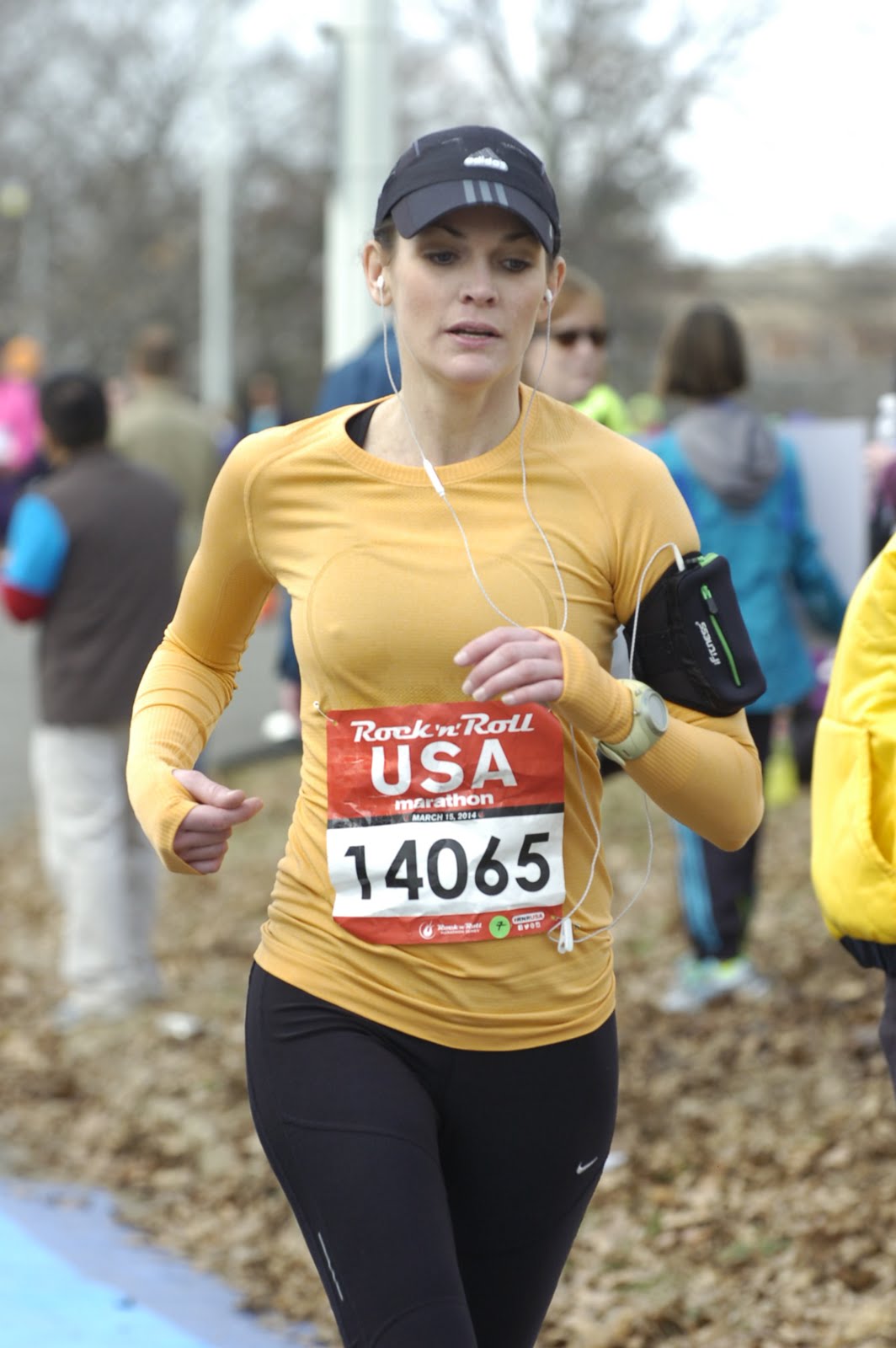 Then, it got hilly. I was displeased. After 3 rolling hills, I figured we had to be leveling out. Nope. Another hill loomed a half mile ahead as I crested what I had hoped was the last hill, and a rather loud expletive escaped. Pretty sure I just shouted what everyone else was thinking. While the hills were probably good for my body because they forced me to change pace, they were not good for my mind, which didn’t want a challenge at that point. I wanted to be done. 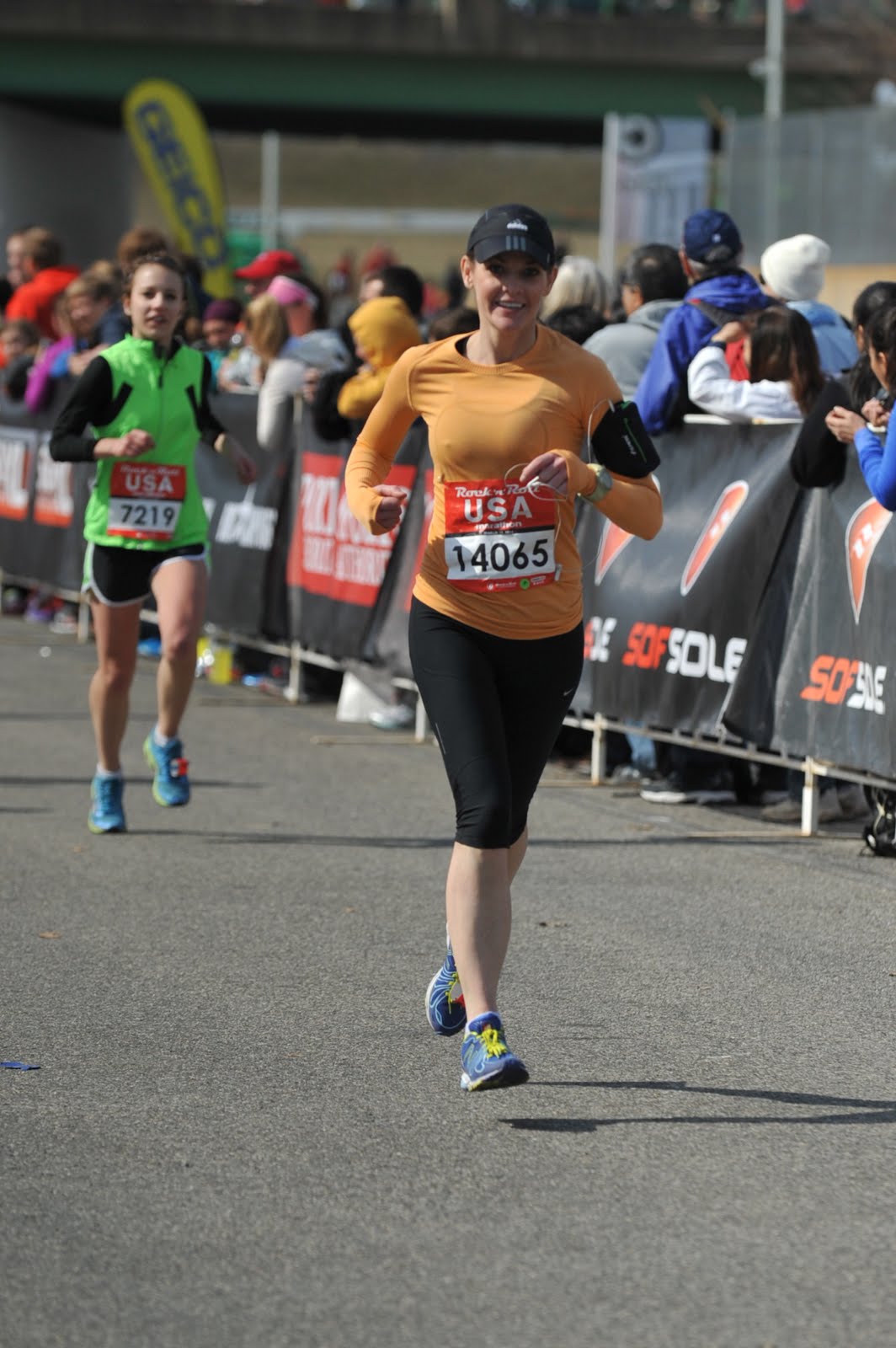 But even though I was tired and even though the pacers were closer to 40 yards ahead by now, my Garmin told me I was still running in the 8:–teens, which was PLENTY fast for me. And while the last few miles should’ve felt long and endless, they weren’t. Before I knew it, I was rounding the bend to the stadium with the finish in sight. My Garmin clocked the course about a half mile long (running through a tunnel confused it), so it was just slightly infuriating when I thought I should be done, but still had a half mile to go. When I realized where the actual finish was, though, and how close I was to it, I bolted. I have never been so happy to see a finish line in my life. Evidence: last mile: 7:21. I may have been a tiny bit excited. I saw my parents as I entered the chute, too, which made me even more excited, if that’s possible. I think I yelled to them, “I RAN A MARATHON!!!!” So much cheese. 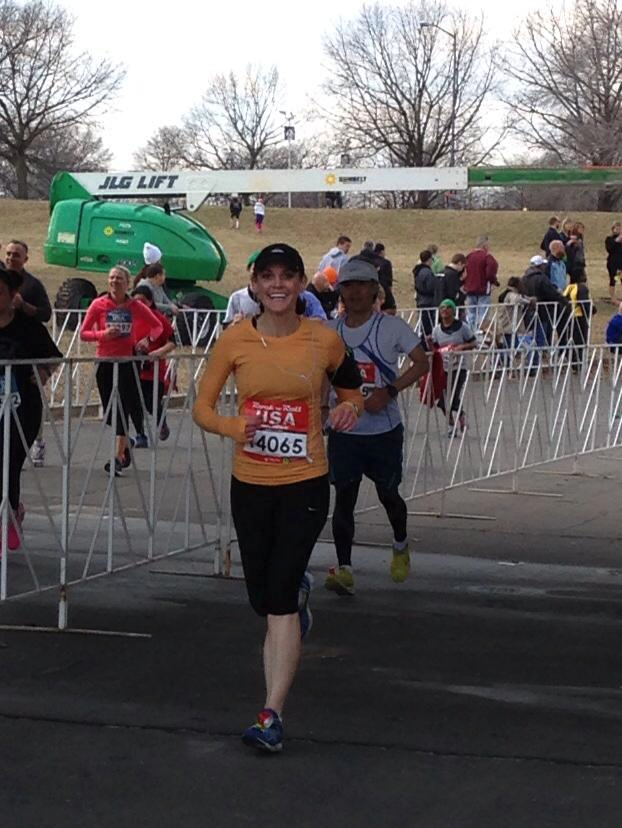 When I crossed the finish line, I was handed my medal. I saw my pace group leaders right away and went over to them to give them hugs and fall all over myself with gratitude to them for helping me through. Mike took my medal from me and put it around my neck and told me I’d earned it. I kind of got all weepy, but recovered quickly when he revealed that he was actually a Secret Service Agent. I guess that makes sense given the horrific events in Boston last year and the fact that we were in the Nation’s Capitol and all, but still. Took me right off guard. Oh, and his name wasn’t Mike, either. Heh. 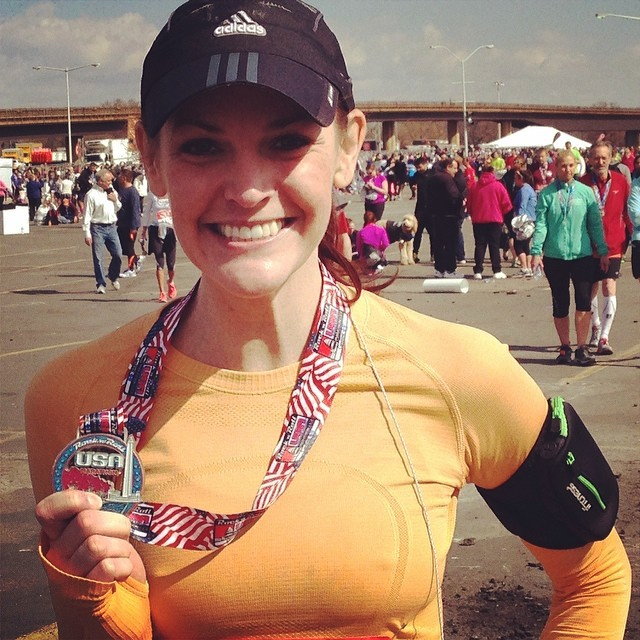 What’s next? Not sure. If I never run another marathon, I will always be happy with the one I did run. The fact that I did it is enough. Reaching my goal is the icing on the cake, and honestly, I don’t know that I can top this experience. And after several (ahem, three) false starts in the marathon distance, I’m just so freaking proud of myself that I finally finished one.

24 responses to “Out of Retirement”