A few months ago, I decided I wanted to go on vacation to Toronto and decided that since Lindsey lived there, she should entertain me on that vacation for four days straight. When I told her about my plans, she said yes which was very exciting since I had only met her once before. Back in the blonde and black and white days.

I’d like to think we took a shine to each other and knew it was a matter of time before me met again.

One thing hubs and I really wanted to do on our Toronto adventures was see Niagara Falls since I knew it was pretty close. I told Lindsey that we were thinking of renting a car and driving over one day when she was like, “hell no, we’ll take you!” So instead of flying into Toronto, we flew into Buffalo, NY so we could hit up Niagara first thing. We got a pretty good deal on a Southwest flight. We were in boarding group C but still managed to score a sweet window seat.

Lindsey and her lover, Evan, picked us up at the airport. Hubs spotted them first, which was lucky, since they were enamored with an American snack machine instead of finding us. Once we got to the car, Evan leveled up our friendship by instantly offering us delicious maple cookies. I should have taken a picture of them, because they were part of my (very important) Canadian culinary adventure. But alas, I did not. Just know that they were delicious and maple and when you are in Canada, you eat maple dammit.

We drove maybe an hour to Niagara, where Lindsey had booked a sweet hotel room for us. This was our view from the room. 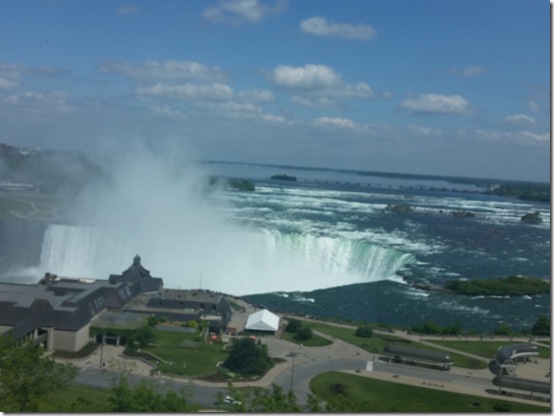 I really have to stop using my  phone to take pictures because that is some blurry crap. Also, this trip make me realize that I am just awful at photography so I have stolen many of Lindsey’s pictures because she is better than me and needs to teach me her ways.

Anyway, none of us had eaten lunch, so we dropped off our bags in the room and walked to place called The Secret Garden. This isn’t it, but this was along the way.

You’ll notice a stuffed parrot in the picture above. His name is Alan Barkin (because he’s a boy and we couldn’t name him Ellen, duh). He was rescued from a crane game and now he’s out living life. You’ll be seeing a lot of him from now on and probably a post dedicated to his exciting new life.

Ok back to lunch. We chose the Secret Garden because it had a patio and we all agreed we likey patios. My first order of business was to try a Canadian beer so I ordered a Steam Whistle, which was good.

I didn’t get a picture of my food, but I had a burger. When I ordered it cooked medium, the girl was like, “we only cook those one way.” And then Lindsey was all, “you get to choose how your burger is cooked in America?” Yes. Yes we do. I’m sorry to all you Canadians who only get to experience well done burgers. It makes me sad for you. Please come to America and have a burger that is cooked medium and thank me later. The burger was good but in a overly cooked kind of way. I also tried some of Lindsey’s poutine (also on my list of Canadian things to put in my mouth) and it was just ok.

Poutine is fries with gravy and cheese curds. This one had shredded cheese instead, and what tasted like canned gravy. No bueno. Lindsey assured me that it was a bad example of poutine and that I had to try it again. Fine, fine. If I must. While were on the food subject, I am completely convinced that Heinz ketchup tastes different in Canada. I feel like their version is more vinegary and America’s is more sweet. Hubs thinks I’m crazy but if I like the taste in America but not in Canada, there’s gotta be something different, right? Who’s with me?

After lunch, we walked over to the Hornblower, a boat that takes you up close to the American and Canadian falls. 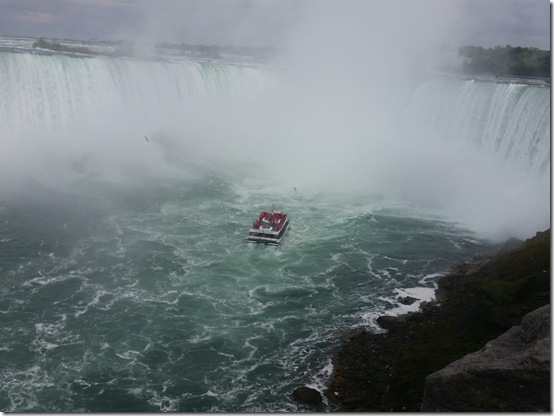 Let me tell you, it is windy and wet down there but also beautiful and amazing to experience. Definitely a must do if you’re visiting the area. I think it’s only $20 which is like $1.50 in Canadian money or something.

After the boat, we walked around and checked out the falls for awhile. It was especially cool to see the water flowing over the edge of the falls. We tried to find a barrel so we could ride over, but no luck. 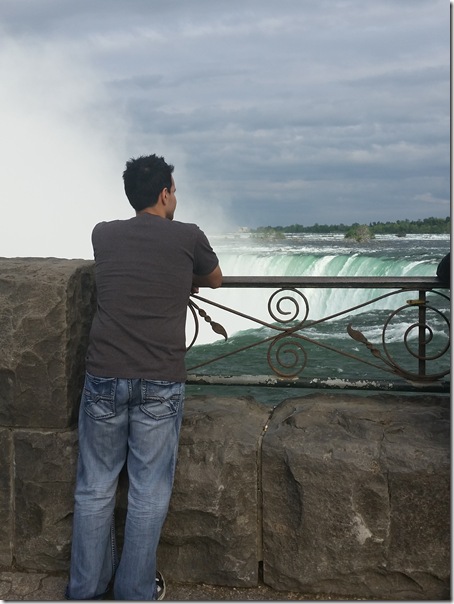 Since Niagara is a tourist area, there are a bunch of gift stores everywhere. Hubs was especially excited to find Kinder eggs. They are illegal in the U.S. (you read that right) because the small toys inside are a choking hazard. Canada all be like, “let our children choke!” Hubs used to love these when he lived in Germany and he always talks about how he misses them, so once he saw them he was like a kid in a candy store. Except he was an adult in a candy store because we were actually in a candy store.

After walking around all day, we needed to freshen up a bit at the hotel before we went out for dinner. And by freshen up, I mean we put on some perfume and called it good. We went out for drinks first and then to a place called Coco’s (also with a patio) and had some really good pizza and more drinks until we shut the place down. I’m absolutely certain I took more pictures at this point but I can’t find them so I guess it didn’t happen. #bloggerlogic

More walking happened after dinner and we checked out the falls at night, which are lit up with different, changing colors. Very pretty. I wanted to go on the nighttime illumination boat tour to see the lights up close but they didn’t run that tour on Thursday, which was a bummer but also a blessing. It was super chilly outside and being on the wet, cold boat probably would have sucked. At the end of the night, we checked out the casino where I proceeded to lose money that Lindsey handed me because I am gambling poison.

It was a really fun and busy first day in Canada.

You can also check out Lindsey’s post about our first day. She remembers things better than I do and takes more pictures.