Leave it to American Horror Story to give us a Christmas episode. We start in 1962 where a guy approaches a bell ringing Santa in front of a store that just closed. He shoots him, puts on his Santa outfit, and breaks into a home where he ties up a couple and shoots them dead in front of their daughter.

Back in 1964, the patients are gathered at the asylum getting ready to celebrate Christmas. Sister Mary Eunice is getting everyone in the Christmas spirit by decorating the tree with something personal from each of them. You know, with locks of their hair. Or their dentures. 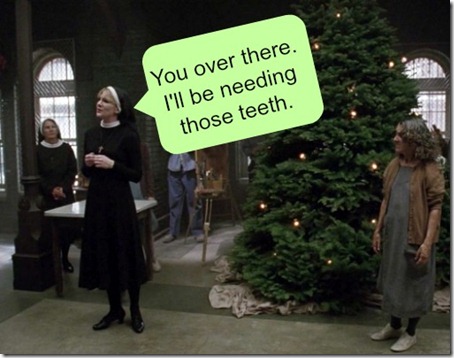 The Monsignor doesn’t think this is weird at all and praises her for bringing Christmas cheer to the asylum. (Yeah. I don’t know either.)

Back in the medical lab, the guard that accidentally shot Grace is visiting her body when Dr. Arden walks in. The guard wants to go the the authorities about what happened. Dr. Arden tries to convinces him otherwise, but has to enlist the help of Sister Mary Eunice.

Sister Mary Eunice visits one of the patients. Of course, it’s the Santa suit stealing killer and she’s got a new outfit for him and a job to do.

Only he fails miserably and gets sent back to his cell for a botched attempt at killing the guard. Sister Mary Eunice does the job herself by slicing the guard’s throat right in front of Santa. And he’s all…

Sister Jude confronts Sister Mary Eunice about being all evil and whatnot. However, plans have already been made for her transfer and she’s escorted out of the asylum. Yet, she was still in the asylum most of the episode so whoever escorted her out did a terrible job. 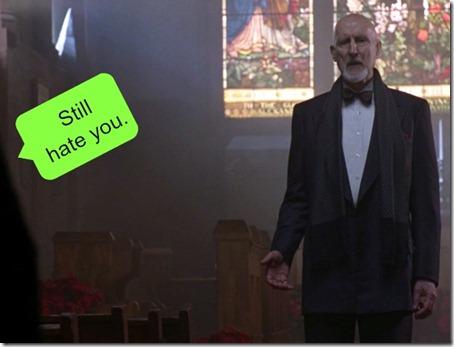 Dr. Arden gives Sister Mary Eunice a Christmas present: a pair of ruby earrings. As she fawns over how beautiful they are, he tells her they were very special earrings.

It turns out Dr. Arden took those earrings from one of the prisoners in the concentration camp. The woman who owned them swallowed them over and over so no one would find them.

Sister Mary Eunice was all….

And Dr. Arden was all… 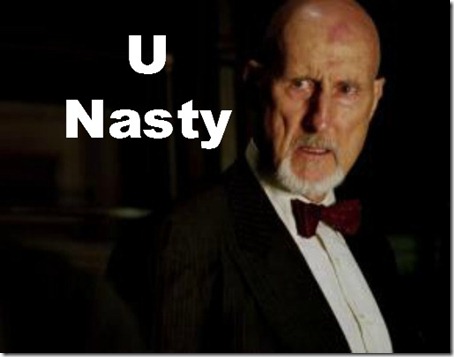 Lana talks one of the asylum nuns into letting her visit Kit. When she gets to his room, he’s sleeping and having a dream of his wife on Christmas. 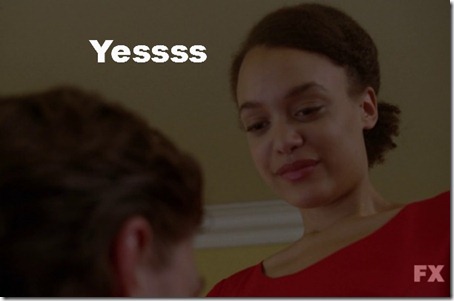 She’s pregnant, they’re happy, and while they’re talking, she turns into Grace.

Lana wakes him. He’s pretty drugged up but she manages to tell him that Dr. Thredson is Bloody Face and they need to prove his innocence.

Lana leaves Kit to make a phone call for help when Dr. Thredson shows up. He’s erased all the evidence that anything has happened at his house and now he’s back to kill Lana.

Just as he’s about to kill her, Kit comes in and hits him over the head with something heavy. Lana wants to kill Dr. Thredson but Kit convinces her not to because they need him to prove his innocence. Instead, they tie him up and hide him. 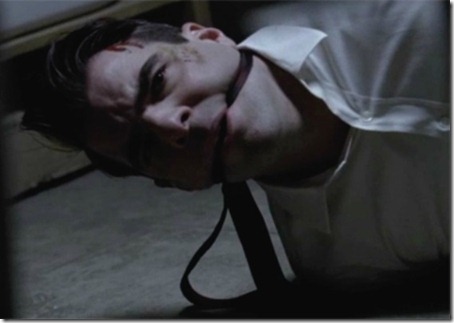 Just as Santa is attacking Sister Jude, Dr. Arden shows up. He tells Sister Mary Eunice that he hopes he’s proven his loyalty to her and they walk away as Sister Jude is attacked.

After a struggle, Sister Jude manages to kill crazy Santa.

At the end, Dr. Arden is disposing of Grace’s body when bright lights start flashing and an alien shows up to claim her body. 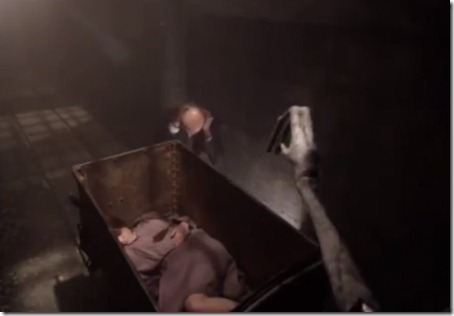 Anyone else think there was way too much time spent on the Santa character? Did not like anything about that story. Also, I could use more Kit right about now.

In better news, did you notice Dylan McDermott is in tomorrow’s episode? YES!