You Never Know What Kind of Runner You'll Be

I ran the OUC Orlando Half Marathon yesterday. It was my third time running the race and my 20th half.

I got enough sleep.

I ate my normal breakfast.

Everything felt fine before the race.

My legs felt heavy from the start.

I thought about DNFing. A lot.

My feet were hurting. (I need new shoes. Again. Sigh.)

My left shoulder pain was back.

I hated every moment. 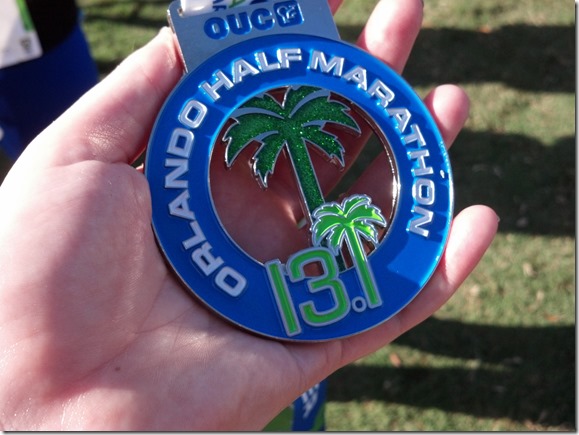 I questioned why I even run in the first place.

I want to forget about it.

I’m glad I had my girls, Michelle and Katy, there to cheer me up.

You never know what kind of runner you’ll be at a race. They’re all different and when they suck, all you can do is try again.

(If you like happier race reviews, check out this one from Michelle.)

I survived half marathon #14 on Saturday.

Let’s just say my lungs haven’t had that much action in awhile. I ran the race two years ago in 2:05: 38 and I knew that wasn’t going to happen this year. Luckily for me, Michelle is 17 weeks pregnant and slow.

Instead of doing a full review, I’m gonna send you over to read Michelle’s recap. Her race was my race. Plus, you’ll get to see an awesome picture of me and a banana. What I will say is that I had a great time running an entire race (finally!) with my chauffer. I had a whole new playlist ready to go on my iPod and never turned it on. So I must have had some pretty good company.

We made it to the race just in time for me to make Michelle recreate a picture from two years ago that she doesn’t even remember taking.

There was also time for me to be vain and make her take a picture of me.

We had a few walk breaks and a 5-minute port-o-potty stop. I was just happy I didn’t have the flu and was able to run the race. I felt good the whole time and never felt like I was putting in a large amount of effort (which was intentional since I didn’t want to overdo it). My legs were still killing me in the later miles because of Crossfit the day before. (I know. But this wasn’t a PR race.)

Since a time goal wasn’t on my radar after being sick and slacking on training, I set a new goal to not PW (personal worst). I’d like to keep my first half marathon as my slowest, thank you. And I did. By four minutes. We finished the race in 2:25:28. We’ve been joking about holding hands while we crossed the finish line for years now. Soooo we may have done that for what is sure to be the worst (or best?) race picture ever.

After we finished, we found Michelle’s husband and friend Tracy and hung out for a bit at the after party. 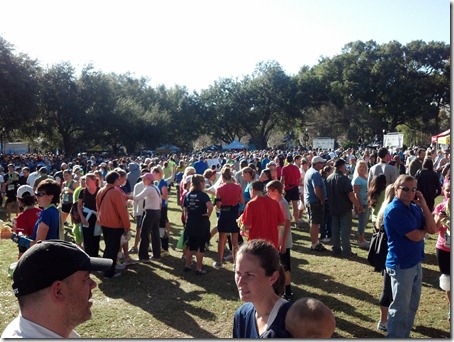 I got proof that Michelle does in fact wear her iFitness belt under her boobs. 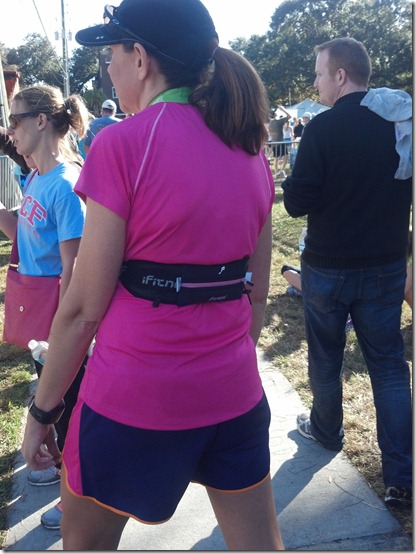 That is something right there.

I also got to recreate our other picture from two years ago. #goalaccomplished

I skipped a breakfast invite with Michelle’s family to go to Crossfit with hubs. My trainer promised to stretch me if I came to see him, so while hubs worked out, I got stretched and foam rolled. Yes, I am so terrible at stretching that I paid someone to do it for me. It hurt like a bitch and I actually broke a sweat, which I didn’t even think was possible, but I’m sure I’d be in much worse shape today if I didn’t have that done. My legs are still super sore.

I had a really great race and now it’s time to get back on track for my next half in January.

1. After New Orleans but before the great plague hit, I did this little workout.

Hubs and I asked our trainer for “medium” workout and this is what we got. Let’s just say after four days of gluttony, those box jumps killed. I probably could have done two sets had I felt less…New Orleansy. Still, it’s a good workout and you can always use a stepper or stairs if you don’t have a box for the jumps. (Just be careful.)

2. I’m running the Orlando Half Marathon this Saturday. Hey, maybe I’ll actually run the race this time. I figure three weeks of booze, no training, and the flu should put me right on track for a PR.

I’m not 100% better (still congested), so instead of a time goal, my new goal is for Michelle and I to recreate this picture from this same race two years ago. 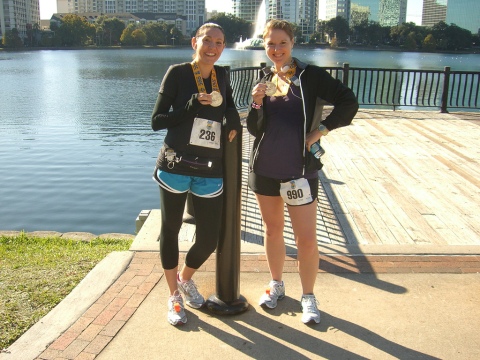 3. I just found out I have a two week work trip to Sierra Vista, AZ starting this Sunday. Nothing like less than two weeks notice for a long ass trip. I checked the weather. It’s 35 degrees out there at night. Since I only have one long sleeved shirt, I’m going to have to pull a Chandler to keep warm.

I don’t even like Boston Cream Pie but this stuff is good. I’m having a problem keeping it in the house because someone else’s greedy little mitts is getting a hold of it.

5. I found out what my babies would look like should I have them.

I was always worried that my kids would be ugly, but now that I know for sure, I’m gonna have ten of those beautiful creatures.

Tagged as Crossfit, My babies are beautiful, Orlando Half Marathon