That Time When I Avoided Fatter Thighs

This morning started out with a 12 mile run with my running group. I wore my new shirt. I attempted to take a few pictures to show you, but I ended up just pointing at my lady parts. 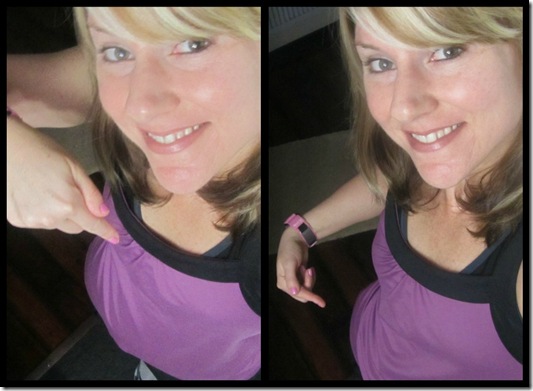 So far, every Saturday morning that I have gotten up for a run, my hair has looked fabulous. Why can’t it look fabulous when I’m NOT running 12 miles. It didn’t look fabulous afterwards, but we’ll get to that in a second.

It was super humid out so the run was challenging, but good. The group started out big – about 30 people – but most were doing 6 or 10 miles. So, around mile 7, we broke off from the others. Only 8 of us did the full 12 miles.

I managed a 10:27 overall pace, which included all the walking breaks (but not the water breaks). I also found an awesome spot to keep my fuel so I don’t have to wear my iFitness belt all the time.

Yep. There. Works like a charm. (Between my sports bra and top) Also makes me look like I have boobs. Lumpy boobs are better than no boobs.

Now that hair thing. EVERY girl that ran 10 or 12 miles looked fabulous afterwards. How is this even possible. You know what I looked like? 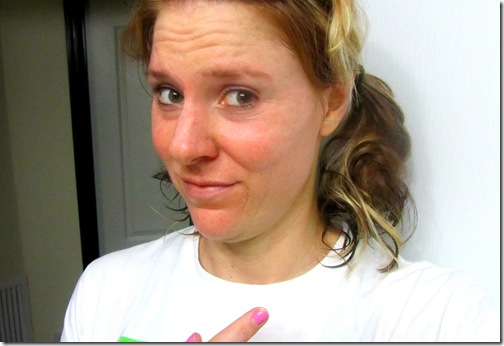 Those used to be brushed pig tails. Let’s get a close up. 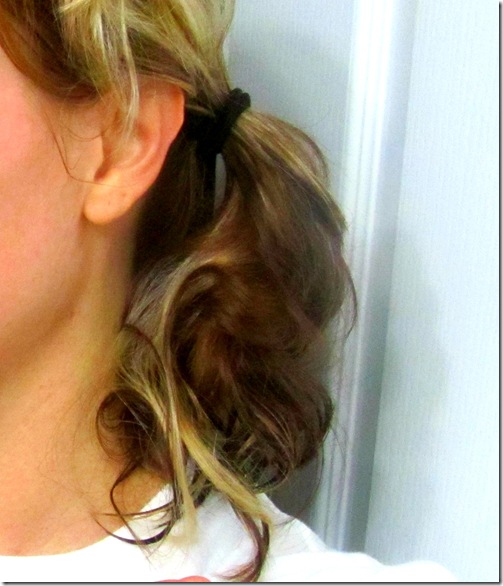 After TWO deep conditionings to get those knots out, the hubs and I went to lunch and tried out a new place (for me at least): Sushi Lola’s. 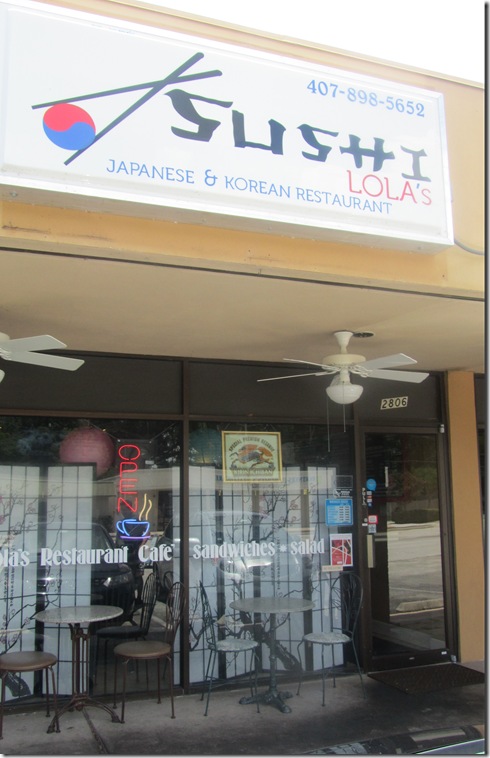 Sushi Lola’s is a Japanese and Korean restaurant located in a crappy little strip mall on Corrine Drive in the Fashion Square Mall area (for those Orlando peeps). Hubs had been there before with other friends and wanted to take me there since he liked it so much. 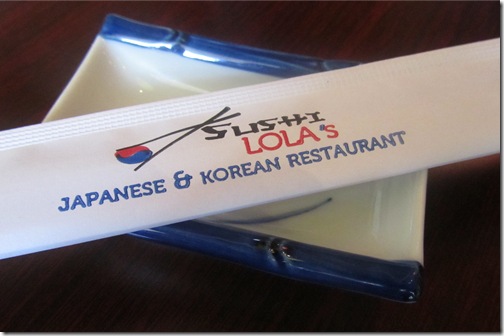 It was very small inside, but cute. 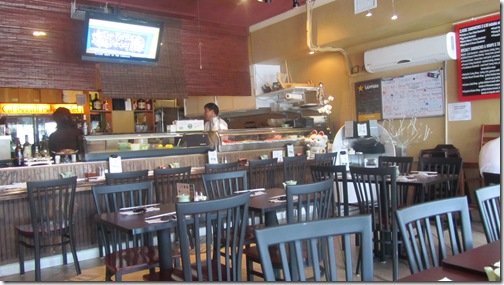 I decided to get Korean since I’ve never had it before. I went with the Bulgoki (Broiled sliced beef marinated in special sauce, sautéed mushrooms, some other vegetables I can’t identify, and a fried sweet potato in the middle). Hubs got the same thing, but the chicken version. 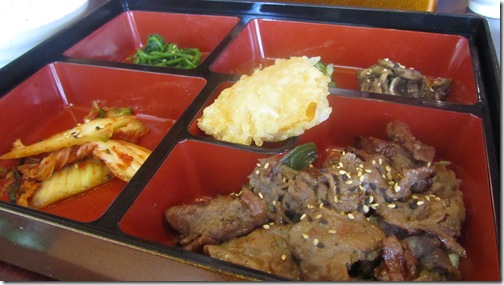 About 5 minutes after we ordered, the waitress told us she forgot to bring our Miso soup which comes with the meal. We both declined because hubs doesn’t like Miso and I’m not big on soup in general. 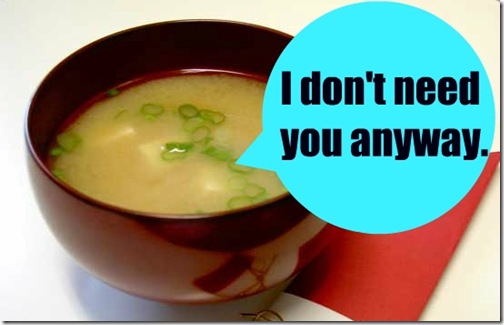 We could hear all 3 employees chatting about how we didn’t want the soup. I actually feel like I offended them. One of them came back out and offered us the ginger salad instead (no charge). So, we accepted. 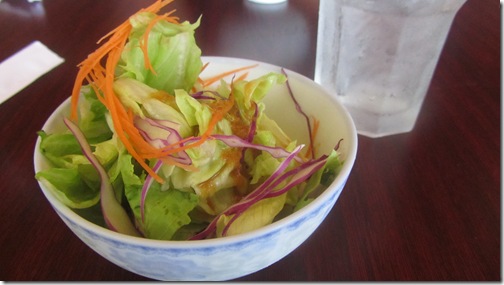 The salad was good and so was the dressing. I’m really picky on my ginger dressings, so this one passed the crucial TEST OF PAULA. (It’s not the real test unless it’s in all caps.)

So, now back to that meal. It was really good, except whatever was in that bottom left corner. 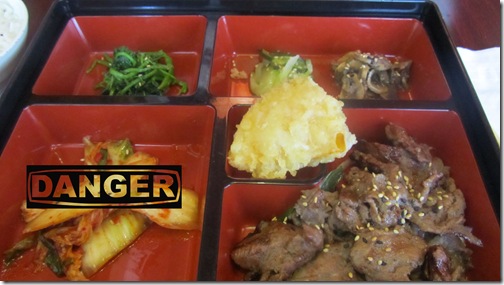 After we were done eating, the waitress let us know she was making fried bananas for us. Again, no charge. And once again, we declined. Not that we don’t like fried bananas, but we eat enough crap as it is so we try to be good where we can. 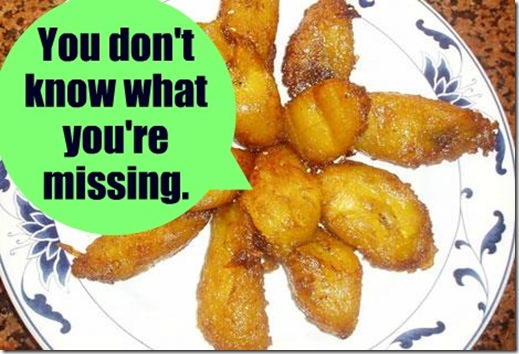 Yes I do. Fat thighs.

More chatter about how we don’t want the fried bananas could be heard from the kitchen. The waitress was already making them. Again, I felt like an ass. They offered us watermelon instead, which we accepted.

The service at this place was amazing. They have a huge sushi menu that I’ll have to try out next time. I felt so bad declining free food. They really did everything they could to make us happy and we didn’t even ask for it. Hubs left a big tip. 🙂

Are you a good tipper? (I usually am. But, I had horrible service once and left a “tip” on the receipt to “not be a dick to your customers.” True story. The guy was a jerk.)